I hope you’re all doing alright, and enjoyed my poem from last time. I currently am feeling betrayed by this New England weather. It’s warm in March and we all think spring is here. Then suddenly, it’s snowing in April!

A good friend of mine penned this emotional letter to the weather this evening. Haha! 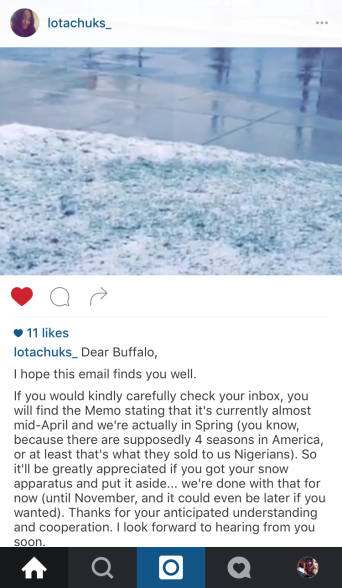 Oh well, what do we say to these things? If God be for us, who can be against us? Not even the weather. That’s such a bible joke, I can’t but laugh at myself, please laugh with me 😀

Press play on this song that has my name. It’s not that I’m famous or anything, Alheri just is a very special name that holds very heavy spiritual significance. I’m sorry the words are in hausa, just enjoy the melody and nod along. 🙂

Here is the catch of fish according to John’s account. NKJV aptly titles this meeting “Breakfast by the Sea.” I think that’s hilarious. It’s from John 21:1-14

Breakfast by the Sea

After these things Jesus showed Himself again to the disciples at the Sea of Tiberias, and in this way He showed Himself:  Simon Peter, Thomas called the Twin, Nathanael of Cana in Galilee, the sons of Zebedee, and two others of His disciples were together. Simon Peter said to them, “I am going fishing.”

They said to him, “We are going with you also.” They went out and immediately got into the boat, and that night they caught nothing. But when the morning had now come, Jesus stood on the shore; yet the disciples did not know that it was Jesus. 5 Then Jesus said to them, “Children, have you any food?”

They answered Him, “No.”

And He said to them, “Cast the net on the right side of the boat, and you will find some.” So they cast, and now they were not able to draw it in because of the multitude of fish.

Therefore that disciple whom Jesus loved said to Peter, “It is the Lord!” Now when Simon Peter heard that it was the Lord, he put on his outer garment (for he had removed it), and plunged into the sea. But the other disciples came in the little boat (for they were not far from land, but about two hundred cubits), dragging the net with fish. Then, as soon as they had come to land, they saw a fire of coals there, and fish laid on it, and bread.  Jesus said to them, “Bring some of the fish which you have just caught.”

Simon Peter went up and dragged the net to land, full of large fish, one hundred and fifty-three; and although there were so many, the net was not broken. Jesus said to them, “Come and eat breakfast.” Yet none of the disciples dared ask Him, “Who are You?”—knowing that it was the Lord. Jesus then came and took the bread and gave it to them, and likewise the fish.

This is now the third time Jesus showed Himself to His disciples after He was raised from the dead.

(All emphases are mine)

The first thing that struck me about the reading is that it is aptly titled “breakfast by the sea”. I wonder how the disciples felt when they realized that they were dining with the Lord. I wonder too, how Jesus felt when He realized that He had successfully surprised the disciples. Although I find it funny, I don’t think it was a hilarious moment, but it’s just a nice thought to have, don’t you think?

This reading made me think about food. I love food. Just food- you know fueling my body. I also love food because of the rituals associated with food.

Just a plate of kiwis I had earlier this week. I reckon it’s a lovely picture, what do you think?

For instance, when I was younger, my father always invited me to share his food with him. Even if I had eaten and was bursting, he would ask me to take a spoon of whatever he was eating. He said it was a sign of love.

Whenever we went out to eat, he would insist on first tasting the food we were served. He always said that in case the food was poisoned he would rather die first than have me eat the poisoned food. I know right? Awwwww!

I have two brothers and while the younger one, Bebe (that’s his nickname, long story, and it’s pronounced Bay-Bay) would insist on eating with me mainly because he always was too lazy to get his own plate of food, Miko (pronounced My-Ko, and it’s another long story how this nickname came to be) never liked to share his food.

This was slightly problematic because I happen to have the very habit of eating from people’s plate. And I generally don’t mind when people do it to me (or do I?)

I thought about these tiny family rituals when as I listened to the reading at church, and I wonder why Jesus chose to share a meal with the disciples. Recall that when He met with the disciples on the way to Emmaus, they too recognized Him with the breaking of the bread.

There certainly are spiritual significances of the breaking of the bread, especially because of Jesus’ institution of the holy communion during the last supper. I also think that there are cultural rituals surrounding food, and that food creates a very simple, yet powerful bond. Eating with someone or sharing your food with someone often is a pretty big deal.

It also is a big deal when you cook with someone, or when they cook for you. I also know about certain cultures where the kitchen is out of bounds to non family members and very close friends. But in other cultures, the kitchen is a social space, a place that holds very deep bonds of love.

I really like to think about food beyond nutrition and biology. I think about the culture surrounding food, the family rituals, and the national and international ramifications. I also cannot but think about the gender roles that have been ascribed to food. For instance, although women predominantly do most of the cooking, the world over, the most famous cooks, are male.

Just so that this post doesn’t get too long, I’ll stop here. Also, I think there’s too much to include in one post so I may do a sequel tomorrow.

But what do you guys think? What food rituals do you have with your family and friends? What are your dos and don’ts while dining?

At what point in a friendship or relationship are you comfortable with sharing your food? Also, is it a big deal when you cook for someone or when they cook for you? Share your thoughts with me in the comments section below.

As always, rest in the love of Jesus, and invite Him to dine with you.

Featured image from here. I chose the image because the food there is mostly healthy! But what can we say? It probably is all GMO food.

Your turn! What do you think? Cancel reply

Verse of the Day

"Can a mother forget the baby at her breast and have no compassion on the child she has borne? Though she may forget, I will not forget you!"

Catch up on older posts